Introducing The Mavs on The Legends Radio Show -- Saturday, August 8

Coach Mike Kemp and "old bulls" David Brisson and Kendall Sidoruk will be the featured guests on The Legends Radio Show on 590 AM on Saturday, Aug. 8 from 9-10 a.m. as the show focuses on the 2015-16 Maverick Hockey Team. The show will be held LIVE at Tiger Tom's, 7103 Military Avenue.

Tiger Tom's will offer food and drink specials during the show, including tacos and green chilis starting at 10 a.m., and $5 Bloody Mary's and $4 screwdrivers from 9-11 a.m.
at 4:50:00 PM No comments:

As we approach the opening of the new Baxter Arena, we wanted to share links to the "Maverick Minutes" videos from February 2014 to August 2015 that feature updates on the arena progress.

May 2014 -- Outside the New Arena (framework)https://youtu.be/oQLRuztWxzs

And, a bonus! The original video outlining the project:
https://youtu.be/-jb-AS73gPM

Jon and I have been very vocal in our support of the NCHC.tv subscription package, and I wanted to write a quick blog post to talk about it, since it's available at a special price before Sept. 1.


We log in to our NCHC.tv account on our iPad using the Safari browser. Once it's up, we use the the AirPlay feature on the iPad to mirror the screen to our television using our Apple TV. So we're able to watch the games on our TV, not just on a laptop or on the iPad.

The biggest question I usually get about buying the subscription has to do with how many UNO games you get with the package. (The answer is: All home and away conference games, except those broadcast on CBS Sports nationally and you also don't get the Frozen Faceoff). They did also pick up one UNO non-conference away series last year (pretty sure it was Cornell), and they also have full replays of the games (home and away) and highlights on there too.

But one of the unexpected things for us that we really liked was the opportunity to watch the other home and away games in the conference. We didn't realize that we'd enjoy catching some of the other conference team games, especially on weekends when UNO was off.

Now, I will tell you that the video and audio quality from some of the rinks isn't always the best. At some schools, university students in the broadcast department are responsible for the production and play-by-play. For last year's St. Cloud series, it used the local television broadcast feed. Sometimes the video is the Jumbotron screen with the home school's radio feed. But we've usually found the feed to be good quality, and it's definitely cheaper than traveling to the away games! (And when there are technical issues, they work on getting them fixed very quickly!)

The NCHC's news release says the video feeds will be even better this year: "In addition to more available games, among the improvements fans will see on the streams are improved graphics, more replays, and an overall enhanced broadcast experience." It also says that Twitter feeds will follow the game action. (Not sure what that means, but that should be fun!)

If you're thinking about buying a NCHC.tv subscription this year, there's a special incentive if you do so by Aug. 31. NCHC.tv is offering a "preseason" pricing special to purchase a 2015-16 conference annual pass for the same price as the 2014-15 subscription — $89.95. Your annual pass "grants access to all available games streamed on NCHC.tv" -- including over 100 games. This includes "almost all home non-conference games and nearly every conference game, plus the quarterfinal round of the NCHC Tournament."

If, like us, you purchased a NCHC.tv conference pass OR a school-specific annual pass (trust me, buy the whole conference pass anyway -- if you buy at the preseason price, it's just $10 more for the year to get ALL the games, not just UNO's!), your annual subscription will be renewed for this season at last year's price too automatically. The NCHC says we'll get an email from NeuLion (which hosts NCHC.tv) approximately 30 days before your subscription renews. You can also buy a school-specific monthly pass for $16.95, or a conference monthly pass (to access all available games during a month) is $24.95. For any billing questions or issues, contact NeuLion at nchctv@neulion.com.

The 2015-16 NCHC season starts Saturday, Oct. 3 with five exhibition games, with two more on Oct. 4. All of these games will be available on NCHC.tv.

For more information about subscribing to NCHC.tv, click here.

Leave us a comment and let us know what YOU think of the NCHC.tv or questions you have! 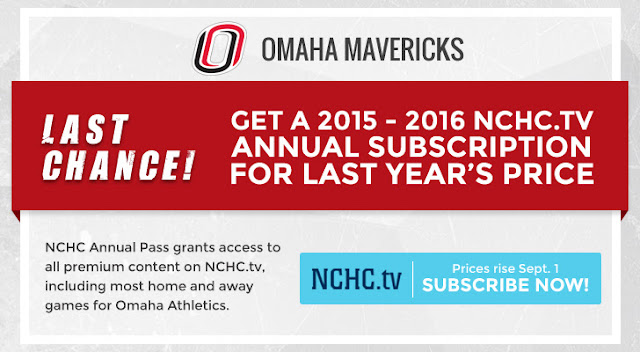