While most people who read this blog are going to be AT the UNO Hockey games (at least the home ones!), I like to do a roundup post each season that has the TV schedule so you can either catch games that you can't make it to, or re-watch awesome match-ups.

I'll be updating this post as the season goes on as additional games on TV are announced. As of this update (Sept. 29, 2016), the Mavs will be featured in 10 televised games (not including NCHC.tv).

NCHC.tv
We LOVE our NCHC.tv subscription. We have the full conference subscription, so it allows us to watch most of the UNO Hockey away games as well as matchups between other conference foes.

According to the NCHC news release, this year's conference annual pass will have access to more than 130 games throughout the season, including almost all conference and home non-conference games. It will also include all exhibition games and the NCHC Tournament quarterfinal games.

The cost for a conference annual pass for this season is $104.95 -- making the cost less than $1 a game. (There was an earlybird special in August that was even less -- watch for that next year.) Or you can get a conference monthly pass for $24.95/month.

Please note: If you purchase a school-specific annual pass or monthly pass, these subscriptions automatically renew each year unless cancelled.

All games shown on NCHC.tv during the upcoming season will be in high definition (HD).

New this year: Viewers with subscriptions will be able to watch NCHC.tv on both Apple TV and Roku devices. (Last year, we mirrored our NCHC.tv feed to our TV using our iPad and Apple TV, but this year, you can watch it natively on the tv). Or, you can stream games from NCHC.tv on any desktop, laptop, tablet or mobile device with an Internet connection.

Catch a preview of NCHC.tv here:

You can watch The NCHC State of the Conference address on Thursday, Sept. 22 here:
http://www.nchc.tv/nchc/schedule

We asked the NCHC about this, and this was the answer: 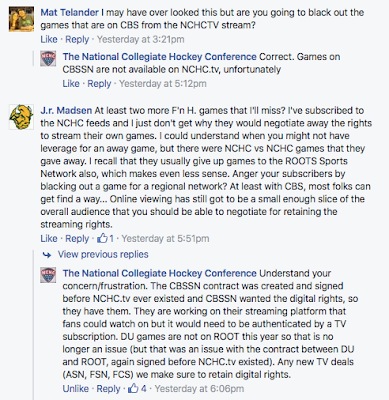 The short answer:
"The CBSSN contract was created and signed before NCHC.tv existed and CBSSN wanted the digital rights, so they have them."

Here's the UNO Hockey games that will be on CBS Sports Network:

Four of UNO's home games will be televised on NET Nebraska, with funding coming from the UNO Office of Academic and Student Affairs.

The games will include:


American Sports Network
This channel, available over the air in Omaha, will feature four UNO games:

Here's the link to the NCHC full TV conference schedule too:
http://www.nchchockey.com/tvschedule