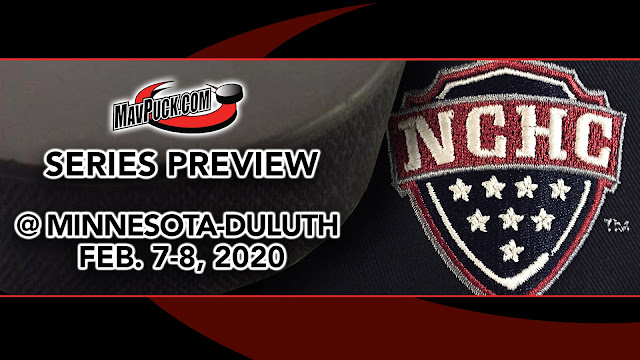 The Mavericks got a much-needed win (and a split) versus Western Michigan last weekend at Baxter Arena, capped off by a Taylor Ward empty net goal that gave him a hat trick on the night.

Hopefully that momentum will carry forward in a critical conference series against the second-ranked team in the NCHC. Omaha needs at least three points to stay in the race for home ice in the playoffs. (UNO has 21 points and is in a tie for fifth place with St. Cloud State; Western Michigan and Denver each have 28 points and are tied for third place in the conference.)

The games will be at 7:07 p.m. local time on both Friday and Saturday night.

Check out the 16th episode of the second season of the “MavPuckCast with Jason & Jon” featuring special guest Bridget!

Next up: The Mavs have a bye weekend before returning to action at Baxter Arena with a home series vs. Colorado College on Feb. 21-22.
at 2:27:00 PM

Email ThisBlogThis!Share to TwitterShare to FacebookShare to Pinterest
Labels: NCHC