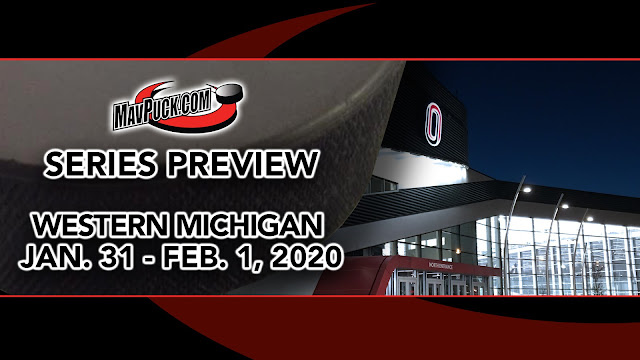 Western Michigan is in a scheduling “pod” with UNO this year, meaning the Mavericks face the Broncos four times this season. In November, Omaha split a series in Kalamazoo. The last two games will be this weekend at Baxter Arena. Note the later game time for Friday’s night's matchup due to the game being televised on CBS Sports Network.

The Mavericks are riding some momentum coming into this, as Jon noted on the MavPuckCast, “pivotal” NCHC conference series. UNO is unbeaten in its past four games (2-0-2), and swept Colorado College in Colorado Springs last weekend after tying Denver twice at Baxter Arena the weekend before.

UNO is 27-20-6 all-time against Western Michigan, including 15-7-2 at home. (Fun fact: UNO swept WMU at the CenturyLink Center in October 2004 on the weekend that Jon and I got married.)

The Broncos will be without junior forward Paul Washe, who is serving a two-game suspension for confronting NCHC officials. Washe is the #2 points producer on the WMU roster this season with 9 goals and 9 assists.

UNO Gateway reporter Jordan McAlpine reports the Mavs are a bit banged up heading into the series. The link to his series preview is below.

TV:
> Friday night’s game will be aired nationally on CBS Sports Network (and will not be available on NCHC.tv). For the TV broadcast, Ben Holden will provide play-by-play, Dave Starman will give analysis, and Shireen Saski will report rinkside. Saturday’s games will be streamed on NCHC.tv ($)

Also check out episode 15 of the second season of the “MavPuckCast with Jason & Jon.” This episode features Jon and Jason talking about the sweep at St. Cloud, a recent article that sparked controversy among Mav fans, and their predictions about Mavericks vs. the Broncos.


Next up:
The Mavs travel to face Minnesota Duluth in Duluth next weekend.
at 1:00:00 PM