A Hockey Fan's Life: Our Trip to the NCHC Frozen Faceoff 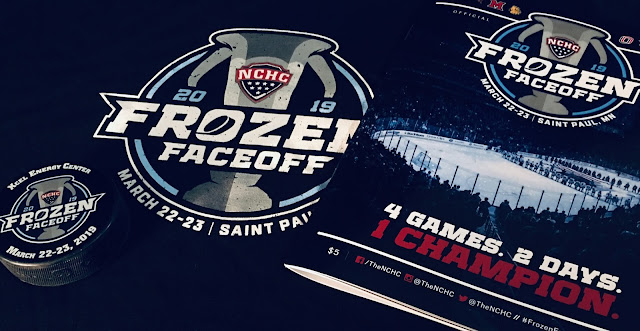 Bridget and I have been fortunate to be able to go on a lot of hockey road trips. As you can imagine, most of those trips have been in support of the University of Nebraska at Omaha Hockey program in various road series and postseason tournaments.

But some of our favorite hockey-related trips have been those that didn’t involve the Mavericks at all. 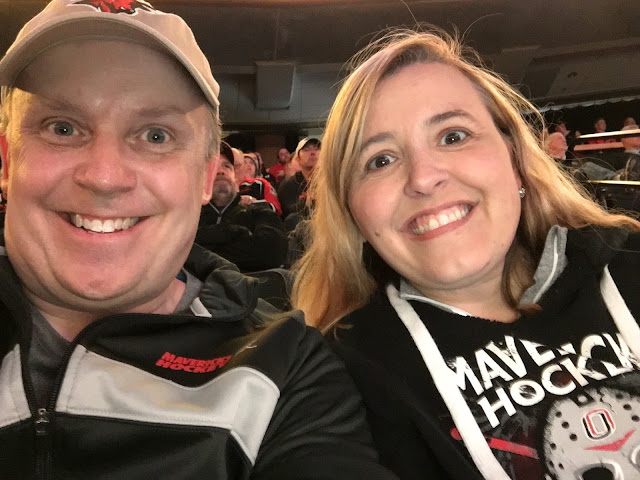 The last time we attended a neutral-site conference championship event was the 2005 CCHA Super 6 in Detroit.

Like many UNO Hockey fans, we figured we’d wait to attend the NCHC Frozen Faceoff until the Mavs made it to the conference finals.

That sentiment changed when we won a free pair of tickets from UNO to this year’s event.

The NCHC Frozen Faceoff is held at the Xcel Energy Center in downtown St. Paul. The venue is the home of the Minnesota Wild. We have a number of friends who have attended Wild games and the Minnesota boys high school hockey tournament at the venue.

This was our first time at the ‘X.’

We drove up to St. Paul on the 21st, and settled into our hotel (which was within reasonable walking distance from the venue). Our room looked out onto the gorgeous Cathedral of St. Paul (more on that later). 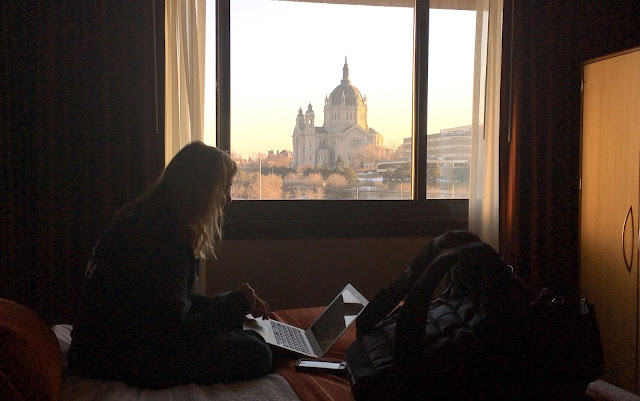 We ate dinner at The Peddler’s Pub, which was located in our hotel. The food was good and the prices were reasonable. (Bridget's late brother Sean would have loved the bike-themed restaurant.) 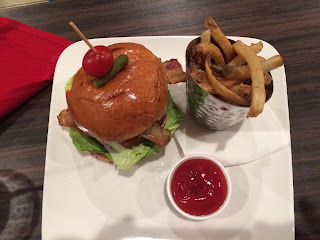 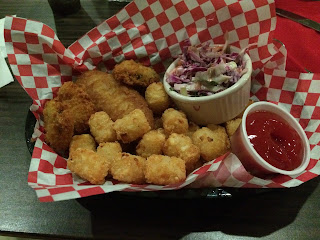 The NCHC Frozen Faceoff is a 4-team/4-game format with two semifinal games on Friday, and a consolation and championship game on Saturday. As a result, we had some time to do other activities before the late afternoon start times.

On Friday, we met up with some of our UNO Hockey friends (who were also attending the NCHC Frozen Faceoff) at the Mall of America. We played mini-golf at Moose Mountain Adventure Golf in the mall in what was dubbed the “2nd Inaugural MavPuck.com Golf Outing.”

It took us a surprisingly long time to get through 18 holes of mini-golf, but it was really fun to get to hang out with Chris, Connor, Chuck, Brent, Alexis, and Riley.

Brent has mentioned a number of times on Twitter and Facebook how he has made a trip to the NCHC Frozen Faceoff an annual tradition since the conference started play in 2013.

Bridget and I ate lunch at “Melt,” in one of the Mall of America’s food court areas. I had a melt that consisted of sourdough bread, a fried chicken breast, and red cole slaw. It was good (although a bit too much slaw for my taste). 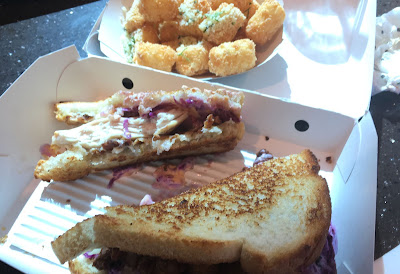 We did a little more shopping at LEGO and the Apple Store before trekking back to St. Paul for the 4 p.m. match at the NCHC Frozen Faceoff.

The weather was lovely, so we walked the approximately 1 mile to the arena from our hotel.

Bridget and I have now been to four NHL venues. The Xcel Energy Center is one of the best. Around the arena (particularly on the club level), there are jerseys displayed from Minnesota state high school hockey teams. 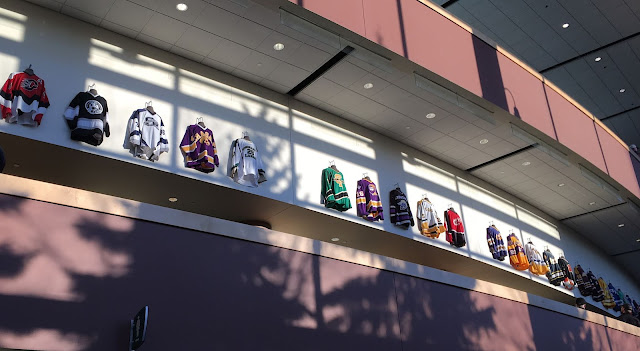 The venue also has a Hobey Baker display.

There were limited concession stands open for the weekend’s festivities. Those that were open included traditional stadium fare like hotdogs, chicken tenders, burgers, and pizza. A specialty stand near our seats had Chinese offerings. Bridget and I both enjoyed the Original Hockey Mom (OHM) brownie stand and had these delicious “chocolate mint” and “puppy chow” brownie sundaes: 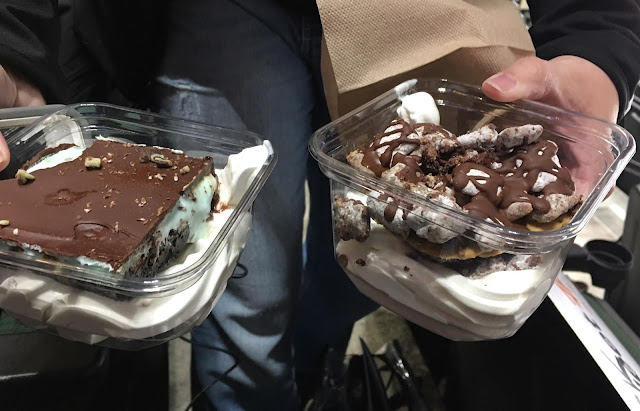 Top seed St. Cloud defeated Colorado College 5-2 in the early game — ending a surprise run by the Tigers in the conference playoffs. 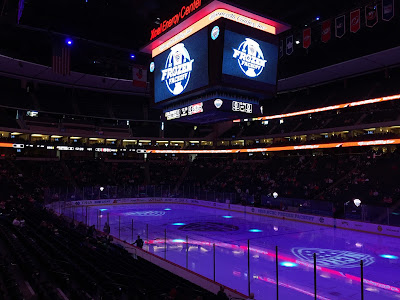 They also had a sign-making stand setup. Bridget made a number of signs for the weekend, including a sign teasing our niece (who is a student at St. Cloud) for not making the trip (the photo featuring this sign was featured on the Jumbotron all weekend long): 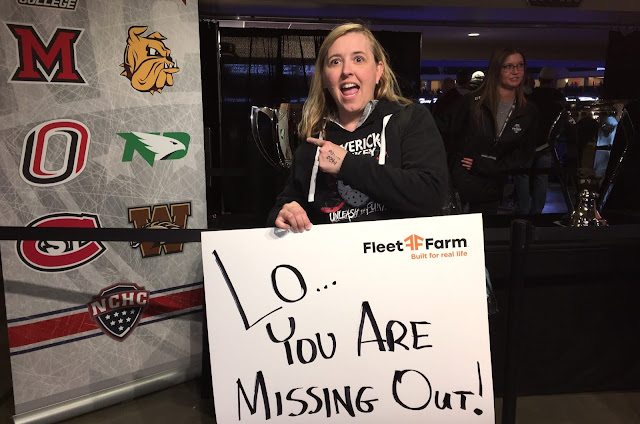 Bridge also made signs using the #SomedayOmaha hashtag (because someday — hopefully soon — our team will make this fine event): 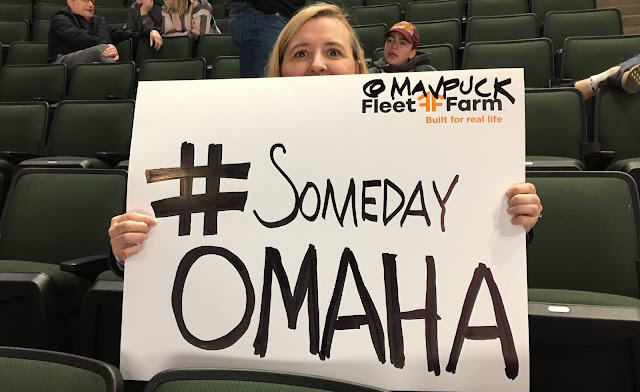 Minnesota-Duluth defeated Denver in the second semi-final game 3-0. I have no idea why I didn’t take a pictures of the rink during this game (you’re probably all like, “Is this a hockey blog or a travel blog?”)

But I did take the opportunity to check out some of the NCHC Frozen Faceoff gear being sold at the Wild merchandise store. I really liked this hoodie, but it wasn’t in my budget: 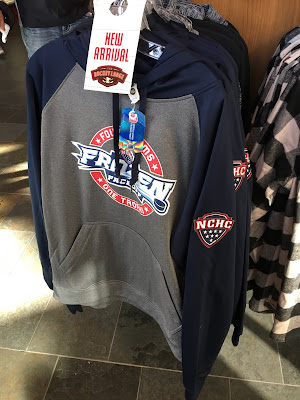 They also had these lumberjack plaid button-up shirts with team/event logos on them (they just felt very apropos to have in a merch store called “The Hockey Lodge”) — but they were $80 each, and only had the teams participating in the tournament: 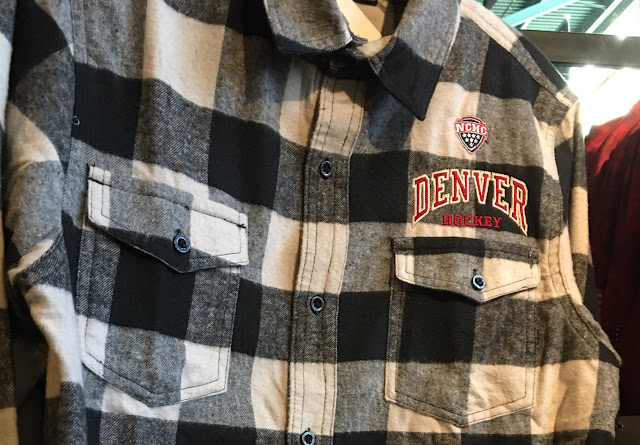 I ended up buying a black Frozen Faceoff t-shirt.

On Saturday, we decided to go visit the Minnesota Sculpture Garden. We had seen publicity materials for the Twin Cities featuring the park’s “Spoonbridge and Cherry” sculpture, but hadn’t seen it in person. (Bridget thinks she may have visited the park many, many years ago on a trip to Minneapolis with Lauren to the Shriner’s Hospital for Children, but we don’t know for sure.) 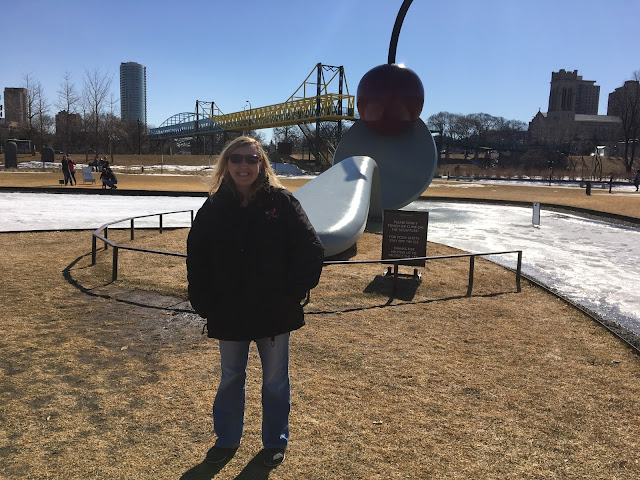 The sculpture garden sits adjacent to the Walker Art Center in Minneapolis. The site features additional sculptures, including this blue rooster: 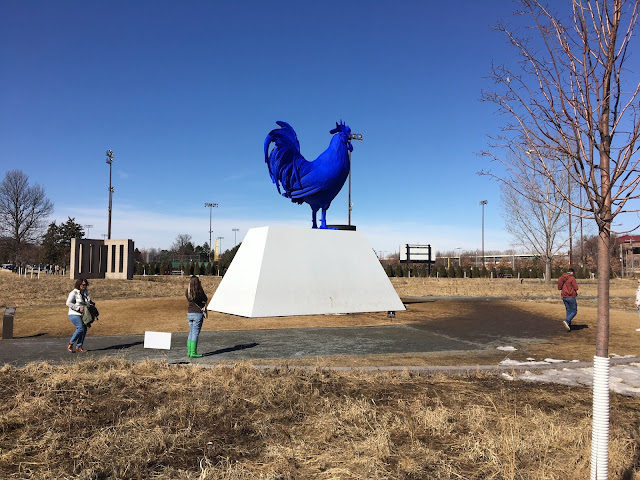 After our nine-mile jaunt to the sculpture garden, Bridget and I made our way back to the hotel for a quick nap, then we strolled over to the “fan fest” before the 3:30 p.m. “third place” game at the NCHC Frozen Faceoff.

I had a burger and fries from the Xstream Cuisine food truck at the fan fest: 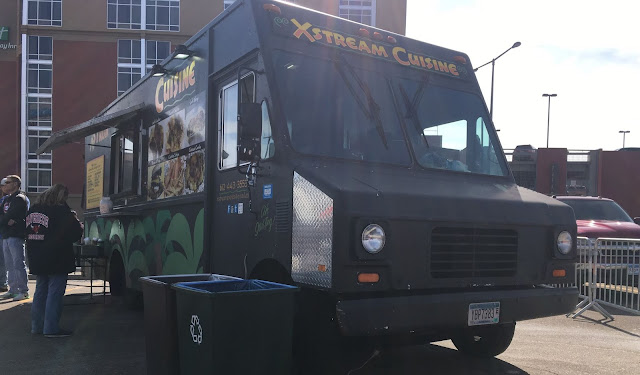 The burger took 15 minutes to cook, and another 20 minutes for me to eat. It was huge! I wasn’t able to finish it (which is rare for me): 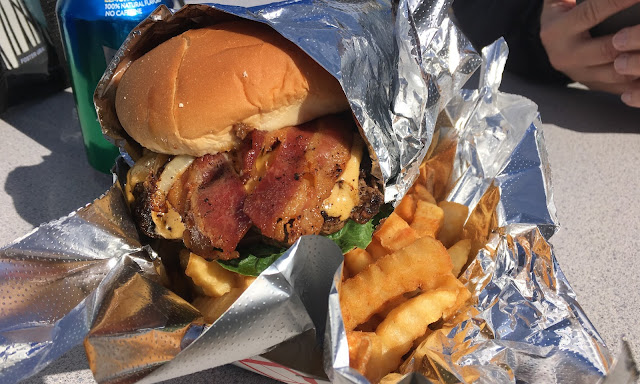 When we decided to travel up for the NCHC Frozen Faceoff, Bridget was hoping to have the opportunity to meet Verna Toller — the Business Operations Manager for the NCHC. We’ve corresponded with her on Twitter over the past few years, but had never met.

We were both happy to have the opportunity to meet her on Saturday afternoon at the Xcel Energy Center.

Hockey fans often refer to the NCHC as “the best conference” in college hockey. The reality is that a great tournament like the NCHC Frozen Faceoff needs great people working behind the scenes to get the job done.

Toller is one of the fine people who keeps the NCHC running like a well-oiled machine. We chatted with her for about 20 minutes. It’s nice to have a chance at these events to meet some of the people we interact with on Twitter each season. Bridget and I are both thankful she had some time for us!

The three of us also took this selfie (the selfies on my iPhone 6S are rarely in focus, but it turned out pretty well): 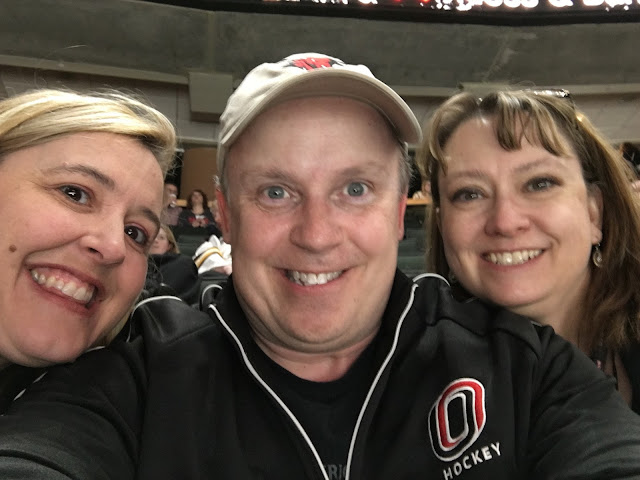 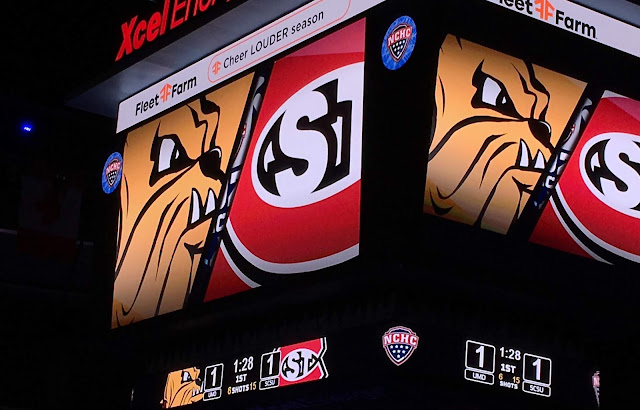 The game lived up to the billing. As expected, both Minnesota schools had strong fan representation in the arena, and the atmosphere was electric. The heroics on the ice were exciting, and the game went to not one, but two overtime periods. It ended after 11 p.m. local time. 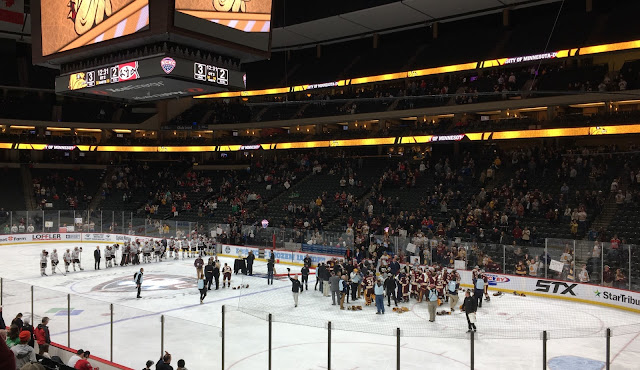 Because the game went late, we didn’t get to bed until around 12:45 a.m. As a result, my plan to attend Mass with Bridget at the Cathedral of St. Paul went awry. 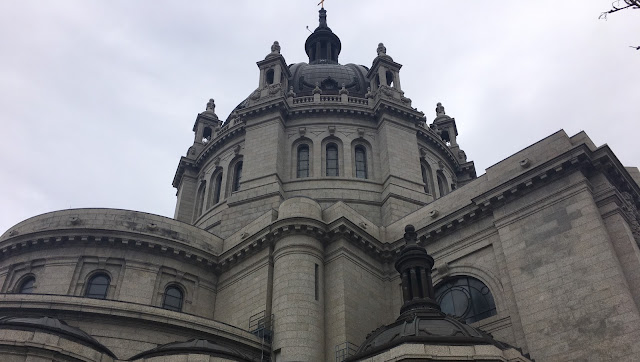 Thankfully, she drove me over to the cathedral on the way out of town. There are a number of really beautiful aspects to the church — including an ornate domed ceiling and stained glass throughout: 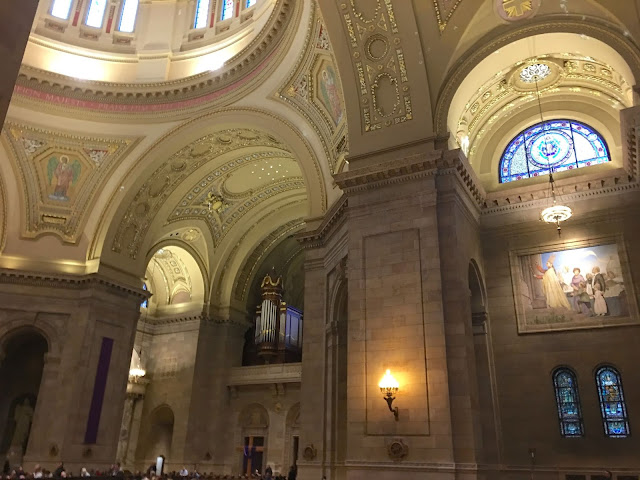 As I mentioned earlier, we have a number of UNO Hockey friends who make the trip up to St. Paul for the NCHC Frozen Faceoff on a perennial basis. They kept telling us what an enjoyable trip it is.

They were definitely right.

If you love watching college hockey like Bridget and I do, the NCHC Frozen Faceoff features the nation’s best collegiate teams competing in one of the finest venues in a hockey-rich state.

It is a fun weekend — even if your team isn’t participating.

Bridget and I hope to make this an annual tradition.