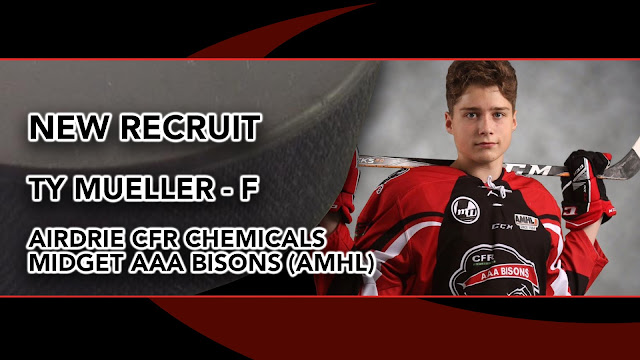 UNO just received its first verbal commitment from a recruit born in 2003.

That recruit is forward Ty Mueller, a Cochrane, Alberta native on the “Reserve Roster” for the Okotoks Oilers in the Alberta Junior Hockey League (AJHL).

Mueller (who turned 16 on Feb. 26) is the youngest recruit among UNO’s batch of new commits. He is listed by Elite Prospects as a 2021-22 commit.

Mueller appeared in two games this season with the Okotoks Oilers this season, and tallied one goal in limited duty.

He logged most of his playing time this season with the Airdrie CFR Chemicals Midget AAA Bisons — part of the Alberta AAA Midget Hockey League (AMHL).

In 34 regular season games with the Bisons, Mueller had 10 goals and 24 assists. He sounds like a good two-way player who performs well in the offensive and defensive zones.

Mueller was featured in a WHL Bantam Draft profile on the Prince George Cougars website in 2018 (he was the fifth player picked in that draft by Prince George). He was one of the key components in leading the Airdrie Xtreme Bantam AAA team to the AMBHL championship. He also played in the Alberta Cup (where the team he played on — Team Central — won the title).

(Gabinet recruited players out of the WHL — “major junior” hockey in Canada — when he was a coach at Northern Alberta Institute of Technology).

Bob Simmonds — Director of Scouting for Prince George — told PGCougars.com, “Mueller is probably one of the smartest hockey players you will see; his hockey IQ is off the charts.”

“If you watch him closely he does so many of the details the right way. He brings skill and scoring and he makes the players around him better. He’s a very cerebral player.”

>> Visit the following link to listen to an audio interview with Mueller (at the end of the article): pgcougars.com/article/whl-bantam-draft-profile-ty-mueller

We’ve talked a lot on MavPuck.com about the fact that Coach Gabinet is looking for smart decision makers with high hockey IQ. He sounds like a top-tier prospect in North America.

It will be interesting to watch Mueller develop over the next few seasons.

Stay tuned to mavpuck.com/news for all our future recruiting updates.