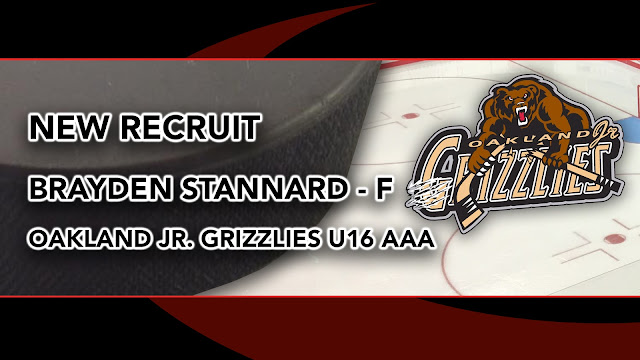 The UNO Hockey coaching staff has been a group of busy bees.

Escanaba, Michigan native Brayden Stannard announced via Twitter on March 1 that he had committed to Omaha (according to @hockeycommits he’ll arrive in the 2021-22 season).

Stannard is a forward who currently plays for the Oakland Jr. Grizzlies U16 AAA team. According to the team website, Stannard has racked up 12 goals and 22 assists in 49 games with the Grizzlies (and has a +22 rating).

Stannard told MiHockey.com: “I picked UNO because it felt like home as soon as I saw it. The campus is amazing. The staff and everyone in Omaha is super friendly and fun to be around.”

Prior to joining the Oakland Jr. Grizzlies, Stannard played for Escanaba Senior High in 2017-18. In 23 games he had 20 goals and 7 assists (according to mihshockeyhub.com, he was a freshman).

When UNO was in the CCHA, Bridget and I made three trips to Michigan's upper peninsula to see the Mavericks play Northern Michigan University in Marquette. We're pretty familiar with the area and with Escanaba.

Fun Tidbit: The Oakland Jr. Grizzlies Twitter account refers to Stannard as “Big Rig” and shared this video of the announcement that he’d committed to Omaha:

Congrats to the Big Rig @B_Stannard21 on his commitment to @UNOmaha today! His growth as a player this year has been amazing. #GrizzGang #Culture pic.twitter.com/2hcji6nDlo
— OJG U16AAA (@OJGU16) March 2, 2019

It is always a challenge finding information on young recruits like Stannard. It will be interesting to see how his game develops the next couple of seasons, and where he eventually ends up playing his junior hockey.

One thing is for sure, the coaches are doing their due diligence this season landing prospects for future seasons. That work should start to pay dividends the next few seasons.

Stay tuned to mavpuck.com/news for future recruiting updates.
at 11:08:00 AM