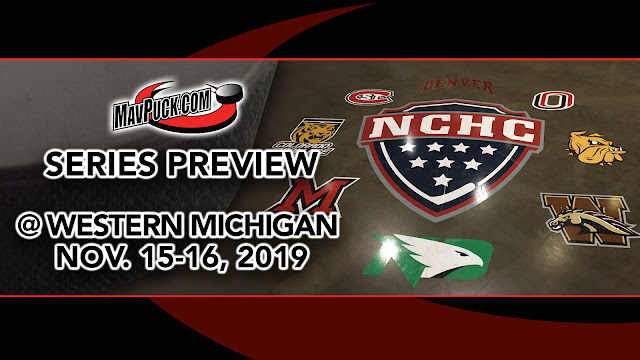 Here we are, in mid-November, and it’s time to start NCHC conference play!

UNO and St. Cloud are the only two teams that haven’t played a conference game yet. Here’s a look at conference standings heading into this weekend:

I have to tell you, Kalamazoo is a fun place to watch a hockey game. If we didn’t have some work projects that needed to be done before next week, we would have hopped in the MavPuckMobile™ and headed to Michigan. We’ve experienced some memorable moments at Lawson Arena — from Krutov’s “promise” (you had to be there for the MavPuck Bus Trip to get this one) to the moment when the #Playfor13 hashtag was born as Zahn Raubenheimer’s teammates helped him off the ice after he blocked a shot and had a career-ending injury on the play.

The Mavs have had quite a bit of non-conference success, most recently splitting with top 20-ranked Wisconsin last weekend at Baxter Arena, losing 5-2 on Friday night before coming back to beat Wisconsin by the same score, 5-2, on Saturday night.

The games versus Western Michigan will begin at 6:05 p.m. both nights, and we’ll be live tweeting the action on our Twitter account (@Mavpuck).

One player to watch this weekend is freshman Joey Abate, who has a NCAA-leading FOUR game-winning goals. We expect to see Isaiah Saville in goal, although Mike Gabinet mentioned that he hopes to get Austin Roden in the rotation as the season continues.

There was no Weekly Media Availability posted again this week.

Note: If you had subscribed to FloHockey.tv for the Ohio State and Alaska Anchorage series, be sure to cancel the subscription this week to avoid ongoing charges!

Check out the sixth episode of the second season of the “MavPuckCast with Jason & Jon.”