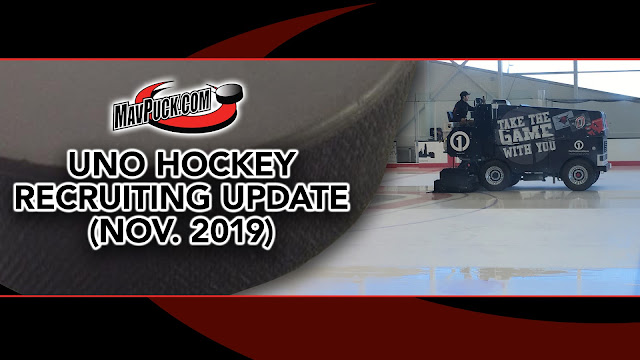 The last time we put together a recruiting update for MavPuck.com it was Feb. 14, 2019 (nothing is more romantic than a blog post about future recruits!)

The University of Nebraska at Omaha Hockey staff has been busy in the intervening months.

Since that “roundup” post in February, UNO received verbals from several new recruits for future seasons.

When you combine all of these commits with players who “pledged their allegiance” to UNO prior to the 2018-19 season, there is a lot to sift through.

Note: Our list is “culled” from Chris Heisenberg’s exhaustive college hockey recruiting spreadsheets and the information offered on EliteProspects.com.

As a result, things are still very much up in the air at this point.

A word of caution as we proceed...

Having followed UNO’s recruiting over the past 22 years, you can’t take anything for granted as it regards “verbal commits” — especially those scheduled to come three to four seasons out. Some might play for UNO. Others might end up elsewhere.

Until a National Letter of Intent is signed, anything can happen.

Now that we’ve gotten that out of the way, let’s break down the recruits.

LOOKING AT THE NUMBERS

NOTE: It is readily apparent that there are *more* 2020 recruits listed than there are available roster spots in the 2020-21 season. It’s debatable if we'll see all these players next season. For example, some sites have Nolan Krenzen listed as a 2020 recruit, while others have him listed as a 2021 recruit.

NOTE: There are certain discrepancies as to where some of the 2021 class will be playing this season. We will update the progress of these players as the season progresses.

Gabinet & Co. are reportedly bullish on the upcoming recruiting classes. Looking at the numbers so far this season, you can see why.

Those listed in 2020 class are putting up solid numbers.

Keep an eye on Tyler Rollwagen, Kaden Bohlsen, Matt Miller, Brock Bremer, and Oliver MacDonald this season. We had the opportunity to see Miller, Bremer, and MacDonald in person last season and think they’ll have solid seasons with their respective USHL teams.

As the season progresses, I will work to profile the recruits I haven’t yet covered individually.

I mentioned earlier that there is a considerable amount of uncertainty as it regards recruits a few seasons out. Things will be in flux as the next 24 months progress.