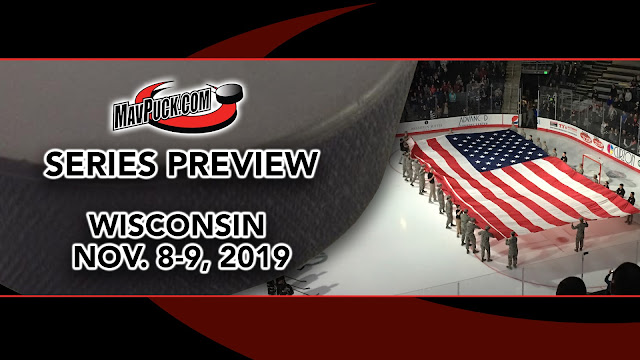 It’s a big series for UNO Hockey this weekend as #12 Wisconsin comes into Baxter Arena to take on your #20 ranked Mavericks.

The Mavs are coming off a win and a tie at Alaska Anchorage last week in a Thursday-and-Friday series. UNO is 4-1-1 on the season, including 2-0-0 at Baxter Arena this year. The four wins are almost half of the total wins the Mavs had during the entire 2018-19 season.

Wisconsin is 4-4-0 overall. The Badgers were swept by Penn State last week in Big 10 conference play.

UNO is 4-8-1 all-time against Wisconsin, including 2-4-0 in home games. However, the Badgers have never played at Baxter Arena. (The last time the two teams met was in Madison, Wisconsin, when the Mavs won and tied on the road).

There are several connections between Omaha and Wisconsin. Current Badgers associate head coach Mark Strobel was an assistant coach with UNO from 2002-2004 (while UNO Hockey Head Coach Mike Gabinet was a player). In addition, Mike Kemp, former UNO Hockey coach (and current senior associate athletic director for events and facilities), was an assistant coach at Wisconsin from 1981-82 and 1983-1996 before he was hired as UNO's first head coach.

It’s Military Appreciation weekend too. Omaha Athletics is saluting veterans and active members of the military and fire responders during the series. Fans can use the code THANKYOU at Omavs.com/tix for a 25 percent discount on tickets for Friday and Saturday’s games.

Season tickets holders also received a special offer via email to purchase additional discounted tickets to Friday and Saturday night’s games. With this offer, tickets are $5 for the upper bowl and $10 in the lower bowl.

TV:
> Friday and Saturday's games will be streamed on NCHC.tv ($)
> Saturday night’s game is also available on CBS All Access ($)

Also check out the most recent episode of the second season of the “MavPuckCast with Jason & Jon.” This episode features Jon and Jason talking about the Maverick games in Anchorage, the idea of streaming press conferences, and the state of the NCHC, along with a preview of the Wisconsin series.

Next up: The Mavericks open conference play next weekend, traveling to Kalamazoo, Michigan to take on the Western Michigan Broncos Nov. 15-16. Both games begin at 6:05 p.m. Central Time (CT).