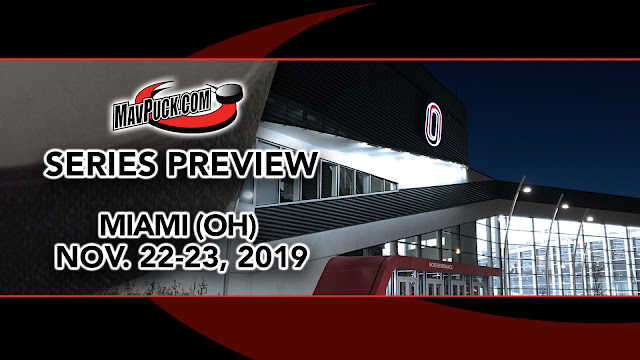 After a split in Kalamazoo to start NCHC play, the Mavs return home to Baxter Arena for the first home conference series. The Mavs are 3-1-0 on home ice so far in the 2019-20 season.

The team now has 66% of the wins they had last season, two months in.

Isaiah Saville was in net for the Mavs on the road last weekend. UNO lost 3-2 on Friday night with goals from Chayse Primeau and Taylor Ward but had a solid outing on Saturday night, winning 6-3, led by a hat trick from Kevin Conley and goals from Primeau, Ward, and Josh Boyer.

For his efforts, Conley was named Bauer NCHC Forward of the Week, and Ward made the NCHC’s Top Plays of the Week highlight reel.

The Mavs are averaging 3.70 goals a game (currently 8th place in the NCAA).

Miami is 3-6-2 overall and 1-3-0-0/0 in the NCHC following a split with defending national champions Minnesota Duluth last weekend in Oxford, Ohio.

The RedHawks have a new coaching staff this year with the firing of Enrico Blasi after last season. Chris Bergeron is a 1993 graduate of Miami and spent the previous nine seasons coaching at Bowling Green. He's assisted by Miami alum Barry Schuette and Colorado College alum Eric Rud.

TV:
> Friday and Saturday's games will be streamed on NCHC.tv ($)

Also check out the most recent episode of the second season of the “MavPuckCast with Jason & Jon.” This episode features Jon and Jason talking about the split with Western Michigan, hockey slang, and a preview of the Miami series.

Next up: The Mavs have a bye next weekend before returning to Baxter Arena on Dec. 6-7 to face defending national champion Minnesota Duluth. Both games will begin at 7:07 p.m.